Remains of the Day by Kazuo Ishiguro

Entertainment Value – B+ Readability – A Overall Value – A

When we think of Batman, we see the adventure and potential danger at every turn, as he uses his exuberant wealth to save the day. But in the bravery of Bruce Wayne, we can at times see the man behind the scenes, pulling the strings, humbly serving his duty: Alfred the butler. 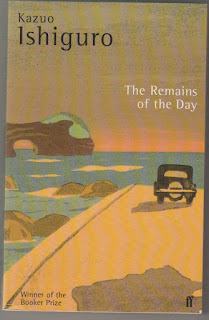 Now bare with me as I compare Alfred with the protagonist of The Remains of the Day. Stevens is the man behind the scenes, orchestrating the affairs of the household so they can run smoothly during the high stress times of diplomats discussing international affairs. There in his place of employment, Darlington Hall, he is utterly invested in becoming a butler of legendary qualities as his father had only told stories about. The story begins with Stevens decision to take a week's trip to Western England as his lordship, Mr. Farraday will be out of the house. Due to Stevens's utmost attention to professionalism, he convinces himself that the trip is not for leisure but rather to meet an old acquaintance: Miss Kenton. Miss Kenton has sent letters to Stevens which have led him to believe that her marriage has become tumultuous, and that she is seeking her old employment at Darlington Hall.

While reading this novel, it becomes impossible to not compare one's own actions with Stevens's fine and precise actions of professionalism. We begin to learn of all that Stevens has given up to become the master butler that he has, and we learn about his father's creation of this image of the butler that has an enigmatic quality that Stevens refers to as "dignity". Through the book, we see through Stevens's retrospection of his time as a butler while Miss Kenton was at the house, and slowly it becomes clear that the butler is largely considered to be part of the house as much as a lamp fixture or love seat is. As Stevens travels through Western England it becomes clear that his human emotions have been stripped in order for efficiency and servilness in action. Perhaps Ishiguro was attempting a social commentary on the classic English butler, the polished man that seems to be the role model for the perfect employee. Perhaps he is saying that, at least at some level, that there is no way to clearly define the upper echelon or the ideal employee for any profession, for it would be taking a human being which is beyond a mere set of statistics and converting their actions into a formulaic life.

Overall, I would say that if you are one to annotate and dissect texts thoroughly, this book has plenty to sort through. With a constantly clashing symbols such as light and dark, mist and smoke, it takes much critical thinking to see the true use of each of these symbols in the construction of Ishiguro's argument in the text. For those that are looking for an enjoyable read, I would still recommend this book though I would warn that you may become discouraged and quit reading if you do not reach at least page 70. This is due to Stevens's highly authentic and impersonal introspection into his past hiding much of the sensitive details that make the book interesting. When the plot thickens and Stevens reveals more traumatic and joyful events in his past, involving his father and Miss Kenton, the book also becomes a page turner.

Email ThisBlogThis!Share to TwitterShare to FacebookShare to Pinterest
Labels: Reviews

To Be Read - August

Very Likely to Be Done by End of August:

Please Comment if you have read any of these novels and enjoyed it, it would really motivate me to read it sooner.

Email ThisBlogThis!Share to TwitterShare to FacebookShare to Pinterest
Labels: To Be Read

Entertainment Value – D/F (this is generous but read on) Readability – A+ Overall Value – A+
Interesting. You're probably scratching your head wondering, how can a novel with such a low entertainment value, have such a large overall value. It is simple, some books are there to keep us on the edge of seats, making us turn the pages endlessly and never stopping. But The Sun Also Rises makes you want to put it down at almost every instant, to close the door on a disillusioned cast that on the surface it seems you can not relate to. But then you'd be mistaken. Perhaps it will hit you at page 1 or maybe at page 250, but at one point in this novel even if just for an instant, you will find yourself in the shoes of a character, and you will feel how they feel. A lost generation is not caused solely by war, and it is said best in a quote by Gertrude Stein, "you are all a lost generation" (Hemingway 1).

I think it is important to mention before I give any commentary on this novel that this is my second exposure to Hemingway's longer works. The first was A Farewell to Arms, which like this read was required for school. I have come to realize with Hemingway novels that when rated the novel, you must separate it into two categories, the conventionally well-written book (engaging, descriptive, plot-driven) and Hemingway well-written book. What does it mean to be a good Hemingway book? The characters must be memorable, for their faults and their efforts, and we become interested in their small subtleties that make them who they are. By the end of a Hemingway novel we realize that in the story little was said directly about each character, and in the moments that they finally open slightly in a matter of pages, they seem to quickly return back to a suppressed state. If someone tries to read The Sun Also Rises in the same way that someone tries to read Stephen King or Dan Brown, then he or she will feel duped or tricked by the novel, wondering how the novel got raised to such a high esteem to become a modernist classic. But that's just what this novel is at its core, a modernist classic. In the same illusion vs reality that Fitzgerald's The Great Gatsby demonstrates, Hemingway creates a gang of characters that on the surface appear cheerful and connected, but that are concealed their damaged insides, which are the result of World War I. Jake Barnes is a man that bears the psychological scars of war, along with physical injury that makes him impotent. Lady Brett Ashley is a woman that was a nurse during the Great War, and lost her love to dysentery, she then got married to man that physically threatened her until the day he died. Robert Cohn is a Jew, previously the champion heavyweight boxer at Princeton University, and is plagued by deep insecurity. These characters and others join together to explore Spain and the spectacle of Bullfighting. In conventional sense, this book is detestable. This book spawns readers that will claim that they found it very engaging and brilliant in a conventional sense, and condemn those that do not agree with them to be "uncultured" or not able to sense "literary brilliance". To that I say, I am not ashamed that I struggled to turn the pages many times while reading this novel, and had to put it down several times, but in the end it was valuable all the same. Hemingway does Hemingway-style books best, he is the greatest Hemingway author of all time. The way he shows the disillusionment of a lost generation, as a motley group of expatriates, can not be matched.
This is as good a novel as any to become exposed to Hemingway, though perhaps it would be best to read some of his short stories first, such as "A Very Short Story" or "Hills like White Elephants", not only is Hemingway the master of the short story (or at least in the top 5 of all time, I have not forgotten the likes of Chekhov, Poe, Kafka or O'Connor), but these short stories will introduce you to Hemingway's iceberg style. Please read the Wikipedia article for more info - http://en.wikipedia.org/wiki/Iceberg_Theory. I would say do not become discouraged by the slow plot, or the lack of action in the novel, and challenge yourself to think in the role of the characters. Sure, Jake Barnes may only be saying short phrases like "I agree" and "That is a good idea", but below the surface is a real human being, steaming with emotions and thoughts that he conceals from the rest of the world. This novel taught me the valuable lesson that more often than not, the people that hurt you are not bad people, but are scarred by past pains and have still not recovered. They lack the ability to forge trust with anyone now, due to a past where many of those closest to them broke that trust that they held dearly. Perhaps those that are hardest to love, are the ones that need it the most. But how far should we go to help someone that finds our help abhorrent?
Posted by Unknown at 12:28 PM No comments: